In this article the most important Oil and Gas fields in the UAE will be discussed and the challenges for oil & gas production. The best practice strategies for oil production are formulated for each of the major oil/gas fields. 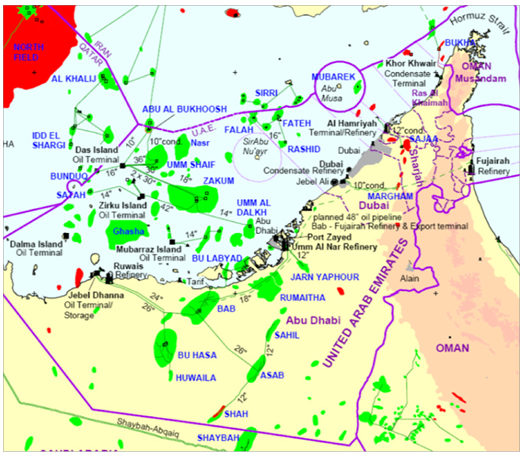 The following Oil and Gas fields will be discussed due to their economic importance, scale and/or potential:

The Bab Gas field is located ca. 150 km southwest of Abu Dhabi, UAE. Currently first attempts are made to produce gas. The field is characterized as challenging field because of its high hydrogen sulfide (H2S) and Carbon-dioxide (CO2) quantities. Because the field is located close to city areas, these gasses can be very dangerous to the public if the gasses are not produced efficiently without leakages (source). Additionally the field is located in the desert experiencing difficult natural conditions like high temperatures, possible sandstorms and rapid erosion in case of flooding due to infrequent rain events. 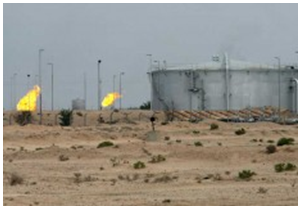 Fig: Gas detection devices which will be placed at the Bab Gas Field (Source)

The aim is to produce between 500 and 1 billion cubic feet per day which can result in high amounts of sulfur needed to be disposed of or used efficiently. A key strategy area of producing gas in this field is hence related to HSE (Health, Safety and Environment).

Except for these difficult conditions to produce the oil, the specific composition of the gasses in the Bab field also has upsides: The business case for this project is besides the price of natural gas also determined by the price of sulfur. Demand for sulfur is worldwide increasing as it is used in the production for fertilizers and industrial applications of metal leaching (the conversion of metals into soluble salts in liquids).  Therefore another key strategy in this project is producing and using/selling the additional components from the gas field and to enable synergy with other industries.

Attempts are underway to build a railroad to make the sulfur available for export by building a railroad to harbors nearby. Other than that Shell, in collaboration with the National Oil Company are exploring possibilities to use additional gasses and materials from the gas field also for domestic use – for example in fertilizers, concrete and asphalt (source).

The Shah gas field has similar challenges as the Bab field. The reserves are located ca. 200 km South West of Abu Dhabi (source)

The upper Zakume field is the 4th largest oil field in the world and actually the 2nd largest offshore oilfield in the world. The field has an estimate reserve of about 50 billion barrels and currently produces about 500,000 bpd (barrels of oil per day). The goal of the companies operating the field is to increase production to 750,000 bpd which should be sustainable for 25 years (source)

As means for producing oil from this fields artificial islands were created. For the completion of the next project phase to enhance production to 750,000 bpd another 4 artificial islands are to be built with a central island to where the processing facilities will be located.

Because the oil field is widespread and horizontally extending, new technologies as ERD (Extended Reach Drilling) are used to be able to drill vertically as well as horizontally over kilometers of distance to reservoirs which cannot be reached directly. For the creation of the artificial islands, extensive dredging, levelling and protection of the islands need to be executed (source) 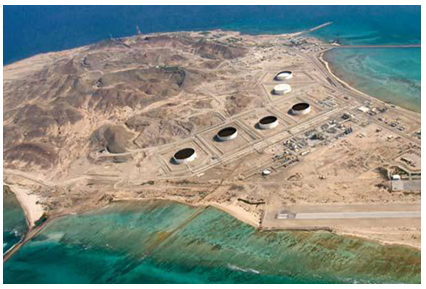 Fig: An island of the Zakum oil field (source)

However, Ghasha is located a) in a conflicting concession area and b) in an environmentally sensitive area as the local seas are feeding ground to turtles and sea cows which live in the shallow waters (Source). 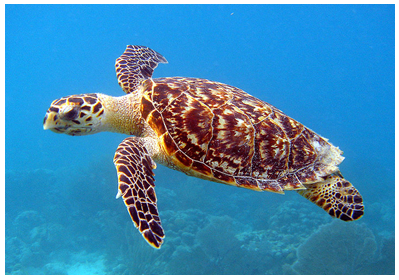 Fig: A sea turtle swimming in the water (Source)

However, with growing demand for natural gas in the UAE, the business case for oil production also at the Ghasha field is growing and leading to increased attention of bidders on the field.

Key strategy for the Ghasha field is to align the interests in the concessions for the area and to produce the gas, if decided to produce from the area, in an environmentally responsive way, to benchmark future oil production as minimizing environmental risks, safety and habitat hazards.

Although Qatar has entered the gas market later than competing countries in the gulf, Qatar is making a reputation as the world’s largest gas exporter (Source). The northern gas fields of Qatar are estimated to hold ca. 896 trillion cubic feet of gas, which is about 14% of all known natural reserves (Source) 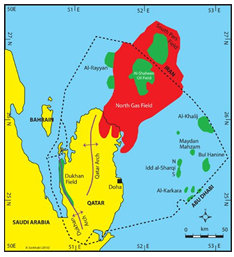 The Qatar North fields are relevant for UAE as they are a large importer of Natural Gas of Qatar. Qatar exports about 2 billion cubic feet of natural gas per day to the UAE and Oman by the Dolphin pipeline (Source) 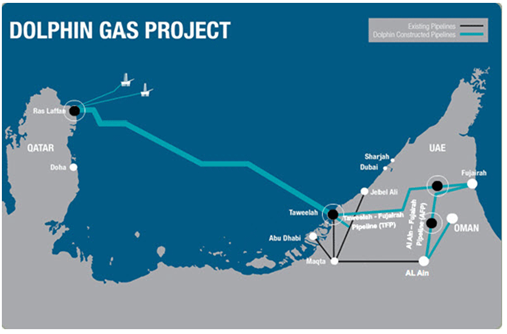