Marine energy is in many articles discarded as future sustainable energy source of the United Arab Emirates. Often solar, wind and waste energy solutions are described as the most vial future sources in the area. Obviously, the potential of solar energy (if the panels are protected well from dirt) in this area is large. This article investigates the Marine Energy potential in the UAE.

Maybe the potential of marine energy is overlooked too quickly. Although concepts are already existent for longer time, marine energy is a relatively new area in the sustainable energy marketplace, and often not yet commercially viable.

Marine energy is often distinguished from hydro – which relates to energy generated from running or falling water (fresh water). Marine energy can be harnessed from 2 sources:

Tidal energy has the following advantage: It shows similarities with conventional hydro. The tidal energy is related to the vertical tidal range and the surface area of the tidal basin volume for which the tidal volume is captured. In UAE the tidal range is about 1.0 m 1.75 m, characterized by weak tidal currents (Coastal Zone Proceedings)

Disadvantages for tidal energy are that generally you need a tidal basin to capture sufficient energy to make the business case. Most potential in the UAE is near to Abu Dhabi, where there are naturally formed tidal creeks and lagoons (See figure below). Near Dubai, the palm islands can provide an opportunity to further build on tidal energy, for example to create a separate basin extension to these islands or use the water pathway in the island itself. 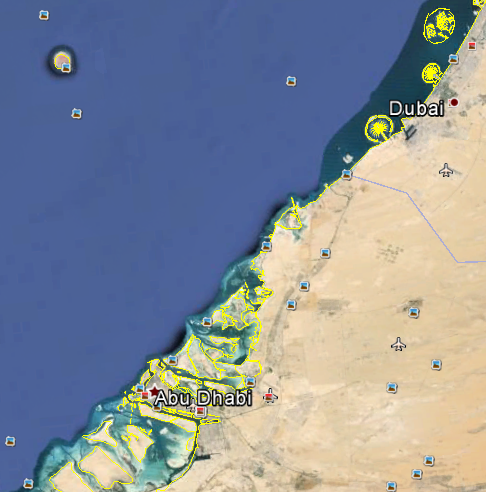 Also tidal energy structures might hinder boats or ships passing, and a solution for the fish in the water needs to be taken into account (so that the fish do not end up in turbines)

Wave energy has the advantage that there is no specific need of tidal basins or another specific geography of the landscape. Also, the energy contained in waves can be over time a factor larger than tidal energy, and since there are no dimensional restrictions it is possible to install wave energy devices over large coastal stretches. Wave energy can be won by systems based on the change in water height between the wave crest and trough, or by oscillations of the wave. In UAE typically waves during Shamal (north-westerly) winds which blow along the Gulf have periods of 7-8 s and a height ranging from 1 to 2 m. (Coastal Zone Proceedings)

For marine wave energy conditions this can be good conditions. Often the largest drawback of wave energy generation systems is that they under storm and high waves, the systems become damaged or get destroyed. The relatively mild wave climate might be an advantage to the possibility of wave energy ‘farms’ in the Gulf.

It has to be noticed that so far, wave energy is not yet commercially viable, especially with relatively low energy prices in UAE. Although this might currently be the case, ongoing business development in this field might lower the costs.